If you’re looking for a rebounder that excels in durability, then the Leaps and ReBounds Bungee Rebounder is one of your best choices. The bungee cords do not snap easily even with months of daily use.

This mini-trampoline is also a lot cheaper than the more popular Bellicon and JumpSport rebounders. However, there are some caveats you need to be aware of before picking this model, though.

In this article, you’ll learn the features of this fitness trampoline and why a lot of seniors are favoring this model over the other ones. You’ll also find out its limitations so you know what to expect and whatnot. 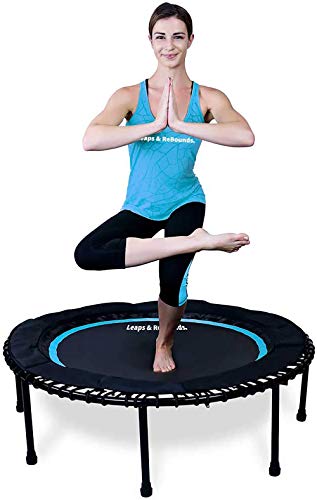 Leaps & ReBounds is certainly not a very popular brand (as of yet), but it’s certainly legit. The great thing about being new in the market is that they offer a much lower price point than the popular ones.

The best thing that I like about Leaps & ReBounds Bungee Rebounder is that they have almost identical quality as the premium ones. In fact, I wouldn’t be surprised if they’re coming from the same factory.

This mini-trampoline makes use of bungee cords to power every jump, instead of springs. It also has a very durable and lightweight frame so you can easily move the unit around.

In the next sections, you’ll learn further if the bungee cords snap easily or if the frame’s structure gets compromised after just a couple of use.

Leaps and ReBounds Bungee rebounder has a weight capacity of 250 lbs. You can still go a little beyond the limit, but it can start to wear out faster than normal.

If you actually weigh a lot less than the limit, you can also include some strength training with your routine. Kettlebells and dumbbells are the most commonly used equipment. You’ll have to make sure that your weight and the kettlebell doesn’t go beyond 250 lbs. 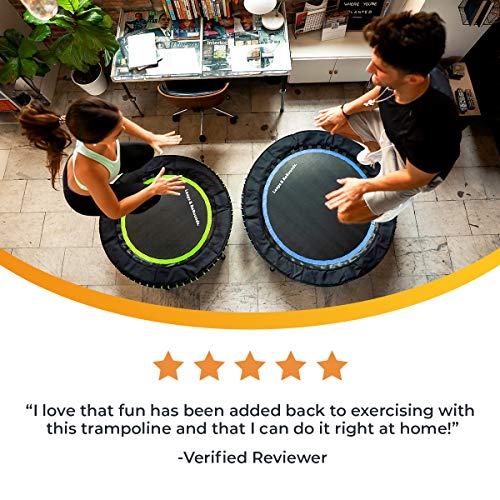 Leaps and ReBounds Bungee Rebounder comes in 2 sizes to choose from. There are a 40-inch model and a 48-inch. The latter obviously has a bigger jumping area.

If you’re undecided between these two sizes, then my advice is to go for the bigger one if you know you’ll be doing more variety in your exercises, like jumping jacks.

The bungee cords, located between the edge of the jumping mat and the frame, require around 5 inches of space. This means that the actual jumping area is just about 34 inches. However, since these bungee cords are covered, you wouldn’t get hurt if you accidentally jump on them too.

The trampoline sits 1 foot above the grounds, which is ideal in maintaining a low center of activity. This is one of the reasons why Leaps and ReBounds is able to hold the ground well and not get tipped over.

Leaps & ReBounds Bungee Rebounder has a frame made of carbon steel, which makes it lightweight and very sturdy.

It has 6 legs made of the same steel and capped with rubbers at the bottom so it wouldn’t slide even on hardwood floors. It is threaded on the other end which makes assembling the trampoline quite easy.

Perhaps the most important feature of using screw-in legs is that they won’t collapse at all, compared to other brands which have folding legs.

Additionally, its low center of gravity makes it almost impossible to tip over even if you end up jumping on the edges. 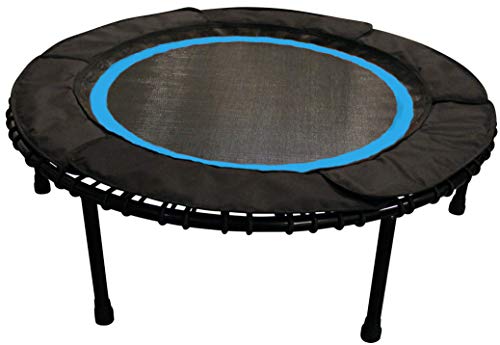 As mentioned earlier, this rebounder makes use of bungee cords instead of springs. It is also a lot safer than steel springs, eliminating the possibility of getting injuries from pinching.

In addition, it comes with 3 additional bungee cords in case they snap, which can take a long time to happen. It will not hurt you at all if that happens, compared to the dangers of getting punctured when springs break.

The cords are made of smooth latex rubber, which is very quiet. If you’re staying on the upper floors of an apartment, you should be able to use this rebounder without disturbing your neighbors downstairs.

In conjunction with the bungee cords, the mat also helps in jumping you off with very less effort. It is designed to effectively absorb the impact of every jump, making it very ideal for seniors who need extra care with their joints.

The jumping mat is made of a basket woven Polypropylene material which doesn’t sag or stretch over time. It’s also UV resistant so you’re sure it will not degenerate in case you feel like doing your rebounding outdoors.

This Leaps and ReBounds bungee trampoline does not include a stability bar upon purchase. This bar is very useful if you’re going be doing more robust exercises, or if you’re a senior and requires something to hold on to.

However, Leaps and ReBounds Adjustable Stabilizer is not always available. You can also get one of the universal stability bars but they’re not a snug fit to this rebounder.

This model is also available in 7 colors, from ruby red to coral pink to citrus orange. These colors are only applied on the bungee cords and on the outline of the jumping mat, which makes it not too intrusive. 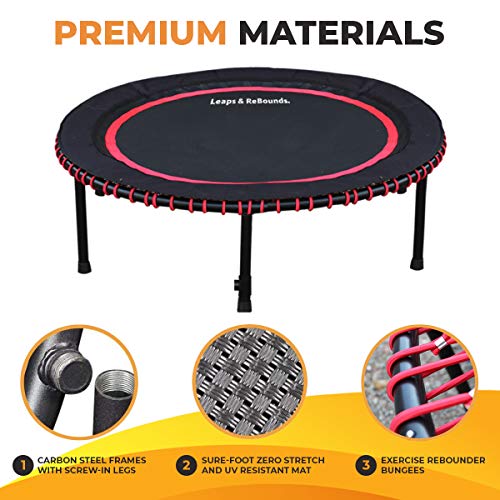 Leaps & ReBounds Bungee Rebounder do require some assembly, but you won’t be needing any tools at all. It usually takes 10 to 15 minutes for a mechanically-inclined person do set this up completely. If you’re a senior, you might need to ask for some help to get it done.

Basically, the unit will arrive at you with the bungee cords packed separately, as well as the legs, the mat, and the frame. It requires some muscle action to pull and attach the bungee cords but it can certainly get a lot easier if there are 2 people working on it.

Here’s a quick overview of the steps in assembling this rebounder:

The trick to attaching the bungee cords easier is to alternate it between opposite ends. This will make sure that you wouldn’t have a hard time pulling the other end.

The assembly is actually a lot simpler than expected and is well thought out by the manufacturer, this means no frustrations even before you start using it

In case you need to store this rebounder for a longer period, you can remove the legs and slide it under your bed.

However, doing this on a daily basis can be quite tedious so it’s best to just prop it up on its side. Be aware that the connection between the frame sections may loosen up if stored this way. You can easily remedy this by wrapping each joint with black electrical tape to hold its round shape.

Leaps & ReBounds Bungee Rebounder received an almost perfect average rating from customers who bought it from Amazon. As a matter of fact, only less than 5% gave it lower than a 3-star rating. People just love this rebounder’s quality for a price that is a lot lower than similar models.

Most of the reviewers who gave it a low rating was because of some factory defects, like uneven legs, etc. The manufacturer actually has this covered because they have a 30-day money-back guarantee and a lifetime warranty as well.

I would recommend that you check other reviews from Amazon if you’re planning to buy this fitness trampoline. It never hurts to get more opinion from other buyers too.

If you’re still unsure of getting this model, then you’d be delighted to know that the manufacturer offers a 30-day money-back guarantee. When you decide to go with the purchase, you’ll also get a lifetime warranty.

Leaps & ReBounds Bungee Rebounder is very easy to assemble and costs a lot less than premium brands. It offers a soft bouncy experience, perfect for seniors with mild arthritis. Most especially it’s surprisingly durable for its price, which is why it’s one of our most recommended trampolines this year.