Zupapa is a great brand for producing loads of outdoor kids toys, including baseball nets, climbing frames and, of course, trampolines!

Over many years of testing and improvement, they’ve been able to produce some of the safest and most enjoyable trampolines on the market, making them a favorite in many households.

In this article, we’re going to be taking a closer look at all the different trampoline products that Zupapa produces, their unique features and determining whether you should get one for your household.

To determine whether or not Zupapa trampolines are worth considering for your next backyard purchase, let’s take a look at some of the features that make them so successful.

Firstly, the shape and size options for Zupapa trampolines are pretty diverse.

Whilst they only come in a round shape, there is a great variety of sizes available, ranging from 8ft to 16ft.

The trampoline itself weighs around 100lbs, though this will change slightly depending on the size of the frame.

Because the trampoline is pretty heavy, it might be fairly difficult to move around and initially install, though this isn’t much of an issue for an outdoor toy like a trampoline that will often just be left in one place.

However, one thing that all the sizes have in common is that they can hold a capacity of up to 425lbs without risk of breaking.

The trampoline is recommended for ages 10+ and you could easily have 3 or 4 children playing on the trampoline simultaneously without having to worry about it damaging and causing an accident.

While it’s probably not the best idea to have a lot of people using the trampoline at the same time, you’ll at least have peace of mind about not having to replace it. 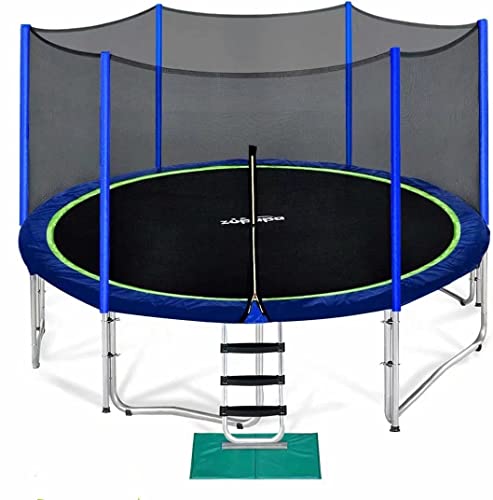 In terms of safety, Zupapa has implemented plenty of protective measures to reduce the risk of accidents and injuries to its users by a great deal.

This is backed up by the fact that each of the Zupapa trampoline products are TUV certified for safety.

TUV is a German company that works to ensure the safety of countless outdoor products.

They’re a very reliable source for safety information and they assure that all Zupapa trampolines have great safety standards.

One aspect of Zupapa’s safety control is to do with the ground clearance of their trampolines.

You’ll find that a Zupapa trampoline will have plenty of space between the jumping surface and the ground underneath.

Research has found that one of the main hazards of trampolines is actually the ground and other obstacles underneath them.

However, Zupapa does a very good job of making this hazard as minimal as possible.

Similarly, all Zupapa trampolines come with a protective net fence that goes around the perimeter of the jumping surface.

This is a pretty common feature of modern trampolines so you’d expect to find it with a brand as reliable as Zupapa.

The net connects solidly to the frame of the trampoline, meaning it would take a great deal of force to break through it or have someone injure themselves by falling into it.

There is also a handy zipper on one side of the fence to allow easy access and to enclose the trampoline into a safe environment.

Another aspect of Zupapa’s trampoline safety is the 2021 upgraded no-gap design.

So many accidents and injuries on trampolines are caused by users getting their arms or legs caught in gaps between parts of the trampoline and its frame.

With this new design, there are no visible gaps anywhere within the perimeter or the jumping area for bouncers to get injured with.

This feature is largely contributed to by the thick, durable pads that are tightly sewn together and cover the dangerous, metallic springs.

It’s well known that one of the most dangerous parts of a trampoline is these springs which hold the jumping surface to the outside frame.

By covering them with this soft pad, Zupapa does well to reduce the risk of injury by landing on the springs by accident.

Of course, this feature does not completely eliminate all risk of injury, so you should still be careful to avoid landing on the springs while using a Zupapa trampoline.

One of the other best features of Zupapa trampolines is their durability. This is mainly achieved through a process known as ‘hot-dip galvanizing technology’.

Without getting too technical about this, it basically means that the metal frame is held together much more strongly than the average trampoline and also makes it far less susceptible to rust.

Because trampolines are primarily an outdoor feature, they have to be able to withstand all kinds of weather conditions.

Not to mention, the shape and size of the steel poles that hold the perimeter fence together are designed with durability and safety in mind.

While most trampolines use a 1mm thick metal pole, the poles on Zupapa trampolines are 1.5mm thick.

This might not seem like a huge difference but it certainly goes a long way to ensuring the frame can withstand a lot of force that can be caused by kids falling into the fence.

Putting together furniture or outdoor products like trampolines can be some people’s idea of hell.

However, Zupapa does a good job of making this process a lot more bearable.

The self locking frame structure doesn’t use any screws and instead utilizes some clever engineering to keep the trampoline together.

This saves loads of time when assembling the trampoline and also makes it more sturdy and durable.

Customer reviews seem to indicate that the instructions provided by Zupapa are super easy to follow and most people should have no issues with constructing their trampoline.

If you are struggling to put the trampoline together by yourself, there’s sadly no way to enlist the help of a Zupapa staff member.

Instead you’ll simply have to rely on some helpful friends or family to get it set up.

Compared to a lot of other trampoline producers, Zupapa has a pretty impressive warranty, which just goes to show how durable their products are.

Their most popular trampoline has a warranty which covers the frame for 10 years, while the jumping mat, safety pad and enclosure net are covered for 2 years.

Naturally, the latter components are much more susceptible to damage because they experience a lot more impact than the frame while being used.

Even so, you shouldn’t expect any of them to break or stop working under normal use within 2 years.

Basically, the only way you’ll ever need to use this warranty is if there was a glaring mistake in the manufacturing process or if you use the trampoline incorrectly.

Similarly, we’ve already discussed how durable the trampoline’s frame is, thanks to Zupapa’s use of hot-dip galvanizing technology.

You can easily expect the frame to last for at least 10 years and it’s more likely that your kids will outgrow the trampoline before it stops working!

On the theme of warranties, it’s also worth mentioning that Zupapa’s customer service system is very pleasant to use, as well.

They’re known for replying to any customer requests fairly promptly and have an ethos of keeping customers happy rather than being stingy.

They’re also often happy to ship new parts to replace damaged ones free of charge, even if the damage is caused by things like weather.

Where Are Zupapa Trampolines Made?

The manufacturing of Zupapa trampolines is done in Germany, which is great news for customers.

German product standards are super high and manufacturers won’t be allowed to ship any products to customers unless they have been rigorously checked by staff and authorities first.

What Size Zupapa Trampoline Should I Get?

Zupapa trampolines come in a pretty wide range of sizes, meaning there are plenty of options to suit you.

The best way to determine what size you need is to measure the space in your backyard where you want the trampoline to go.

As long as you have space for it in your yard, there’s no reason not to go as big as possible!

Are Zupapa Trampolines Worth It?

In general, Zupapa trampolines are great value for money.

Other brands who sell trampolines of similar safety and durability standards will charge as much as double the price of a Zupapa product.

The size of the Zupapa trampoline you order will also have a big impact on the price, so make sure you look at all the options to determine which one is best for you and your budget.

Overall, we couldn’t recommend Zupapa trampolines enough. Not only are they safe, durable products, but they are also great fun to jump on and super bouncy.

They’ll make the perfect addition to your backyard and will give your kids countless hours of entertainment as they grow up!